I’ve had the username travnewmatic for a very long time.

I think I first came up with it back when I was in high school, which was sometime in the mid-00’s (graduated in 2005). I like the name. It’s a portmanteau of my first and last name, with a little twist on the end. Its unique and it doesn’t have any numbers tacked on to the end, which was something I was trying to avoid when I was coming up with my gmail account (which I got when the only way you could get one was through invite!). I’ve used travnewmatic for lots of things. If you do a search for travnewmatic, you’ll likely find some profiles, and results for lots of tech forums (and non-tech forums) that I’ve been on. Apple stuff, linux stuff, geeky stuff. It’s kind of the trail I’ve left on the internet in a way. And I don’t think it paints me in an unfavorable light either. It illustrates my interest in technology over a long period of time, and if an employer were to google me, especially an employer who is in a tech field, I think they would be pleased to see my lifelong interest in technology.

Now, however, I’m not sure what place travnewmatic has in a professional setting. I kind of regret not spending the same amount of time coming up with my first domain name. It appears that www.travis newman.com is available, and I should probably invest the 11 bucks to claim it (assuming that it is, in fact, up for grabs), but travnewmatic.com is a continuation of the trail I’ve been leaving on the internet that my full name.com would not represent. It probably isn’t necessary, but I felt the need to definitively represent travnewmatic on the internet. So that, if an employer were to associate travnewmatic with Travis Newman, there would be a face (this website) to put with the handle sprinkled across the internet. I’m setting the record straight, so to speak. And I don’t think travis newman.com would have had the same effect. Like I said before, while I don’t think a google search of my handle speaks unfavorably of me, I do think that the name “travnewmatic” is a bit childish. When I provide an email in a professional context, I don’t give travnewmatic(at)gmail(dot)com (my primary email). Instead, I give travispnewman(at)gmail(dot)com as the best way to reach me. That second email address only serves that purpose, as any email sent to that address automatically gets forwarded to my primary travnewmatic(at)gmail(dot)com inbox.

Bear in mind my grand plan to be a teacher. I would like to follow the model of one of my former teachers, Mr. Dean Webb, and use the internet as a tool to foster additional learning opportunities outside the classroom. When I was in his economics class, he ran his own forum for his students to use (and his other classes/clubs as well). Although I wasn’t incredibly active on his forum, I liked the idea a lot. So in part, its to practice running a domain for the benefit of my future students, but it is also an opportunity for me to learn web development in preparation for my upcoming teacher test in November. In that regard, travnewmatic.com serves two purposes.

So then imagine me standing at the front of the classroom telling my students to point their browsers to w-w-w.travnewmatic.com. It doesn’t sound professional at all. However, neither does Mr. Webb’s domain: zzzptm.com. $11 is all it would take to make another domain that is more… acceptable for an educational environment, and that’s probably what’s going to happen eventually. While the trail I’ve left isn’t bad necessarily, is that information that my students should be exposed to? I’ll have to do some more research on that, but right now I’m leaning towards no, at least at this stage of my “career”.

For now, travnewmatic.com is serving it’s purpose quite nicely, and I’m really happy that I’ve managed to make it work with blogger. I get sexy, dynamically generated webpages on my own domain for free. I could run a wordpress or joomla or whatever on nearlyfreespeech.net but I’d have to pay for it, and, well, I’m just that cheap right now. Blogger is cake to use, it’s secure (the wordpress I ran on my iMac got hacked, which is why I decided to change things up), and I’m a google fanboy at heart.

I’d be curious to hear your stories regarding a childhood identity that may or may not be appropriate for adulthood.

So, after fumbling through the custom domain setup in Blogger, it finally works!

I’m pretty sure I had it setup identically before as it is now, but for some reason that didn’t take.  I got rid of the custom domain just now, and added it back in again, remade the second CNAME entry in my DNS configuration on Nearly Free Speech, and lo and behold, it works!  Got some random 404’s clicking through my site, but I attribute that to DNS information taking time to propagate.

For those interested in using Blogger with their own custom domain, I encourage you to check out Nitecruzr’s blog.  Additionally, if you’re having issues getting it setup, the maintainer of Nitecruzr is active on the Blogger Support Google Group.

Like I said before, I don’t see how the setup now is any different than how it was before…  other than that it works.  Which, I suppose, is all that matters. 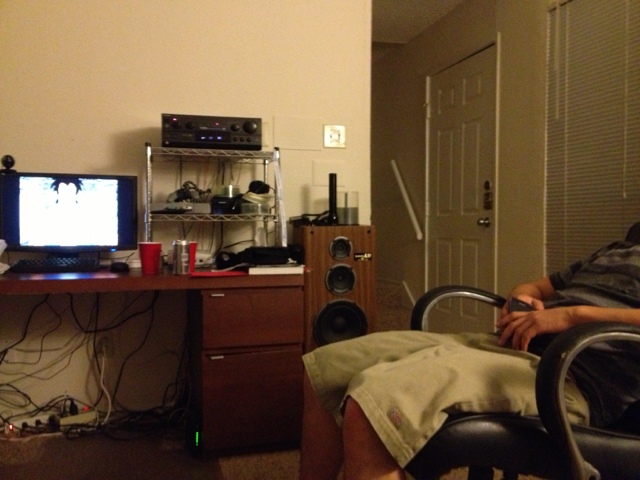 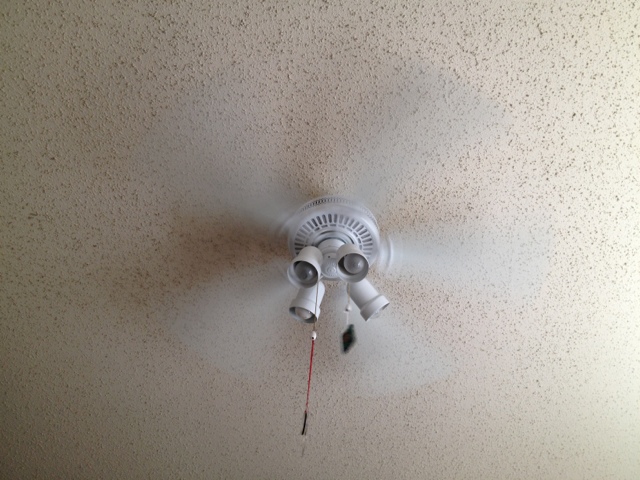 Pack up my stuff so I can move out next Saturday.

Spend some time at workforce solutions looking for another job.

I work this afternoon. It’s a house shift, which is nice because that means I get to eat! It also means I get cut early, so I’m not stuck there until 11..

Not making much money at my current job + moving back in with my parents = extra motivation to do this dang teacher test so I can finally be financially independent. No I’m not in it for the money, but it is a career, much more so than being a server… Plus I’m really looking forward to actually doing it.. Scared, but definitely eager. 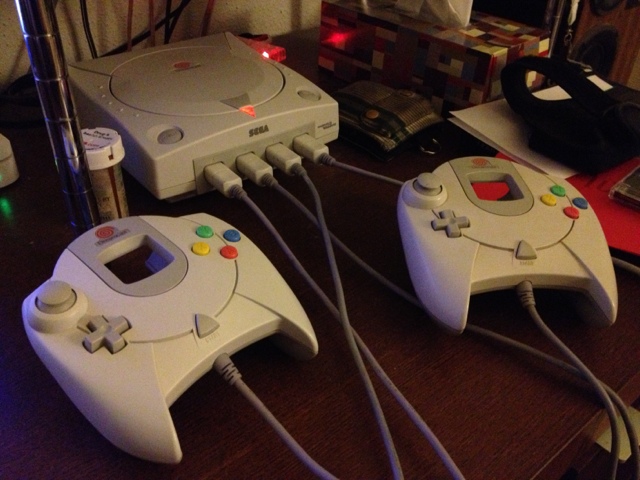 Alex, Kayla, Ryan, and Lauren came over. We played Dreamcast and watched some stuff. Also discovered that one of my fav games, Loony Toons Space Race, is not just 2 player, it’s 4 player! ’twas fun, and good times were had by all. 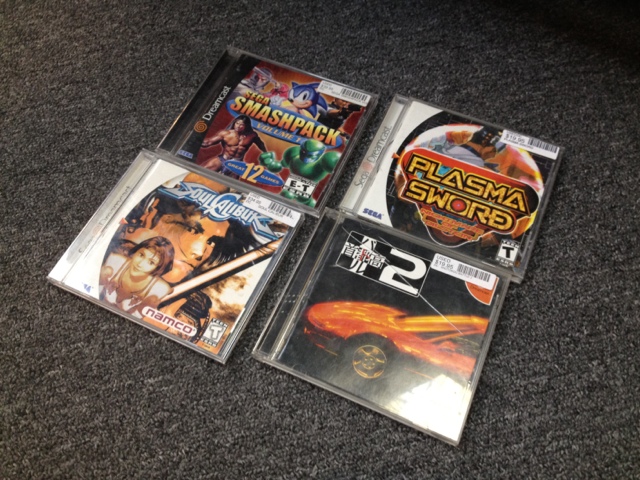 So today I found myself strolling around Collin Creek Mall and had to stop at the local retro game shop GCX. I’ve been rediscovering how awesome my dreamcast is, so I wanted to see what they had for sale. Most of what they had was the usual crap, but they did have a few interesting titles, which are pictured above. I didn’t buy anything, but it’s nice to know they have stuff like that. However I will say that it’s sad to see how malls have declined throughout my lifetime, but that’s another post. 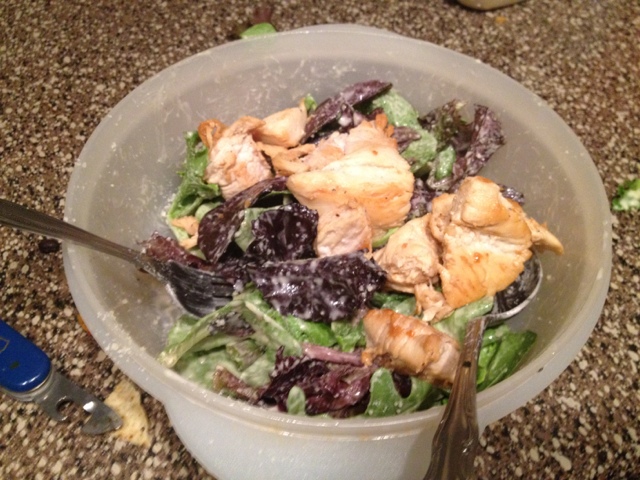 The other picture is of the salad I made tonight. I grilled up some chicken and threw it on top of a pile of greens doused with Newman’s Own caesar dressing and Parmesan cheese. I don’t know why but I’m just know discovering how delicious Caesar salads are.